In Auckland New Zealand, the pottery legendary, John Campbell was born to John and Anne (McLean) on November 11, 1857. When John turned 10, his parents moved to Bendigo, taking him with them. At age 12, John worked as an apprentice for the Bendigo Pottery that was founded by George Duncan Guthrie.

While at Bendigo Pottery, John exhibited remarkable pottery skill that attracted awards during the 1879-1880 Melbourne Juvenile Inter-colonial Exhibition. John’s exhibits that got him the prestigious award were;

John relocated to Tasmania in 1880 and a year after (1881) entered into a partnership with William Brown Jory, his would-be father-in-law, in Jory & Campbell Steam Brick Works firm located at Glen Dhu, close to the McHugh Pottery in the Sandhill area of Launceston.

He purchased about 18 acres potter that formerly belonged to Alfred Cornwell. The pottery was situated at 89 Wellington Road. The name of the pottery was changed to Victoria & Tasmanian Pottery & Pipe Works.   In the year 1891-1892 at Launceston, John Campbell exhibited varieties of urns and pots, vases, cheese dishes with lids, teapots, bottles, Toby jugs and jars.

On April 9, 1884, John and Mary Jane Jory tied the marital knots at Jane’s family home known as “Kings Meadow”, at Launceston, Tasmania. It became a large family thereafter as they had eight children. Colin, the first child took over the father’s pottery business after his death in 1929. The rest of the children are Alfred, Rupert, Florence, Rose, Eva and Arthur. Colin died in 1956, yet the business did not close up and remained the Campbell’s firm until 1959 when it closed up. The manufacturing business, Pipe and Brick closed in 1976.

John Campbell Pottery Became the First in Tasmania to Use Electricity

Campbell Pottery was recorded as the first in the entire Tasmania to function with electricity. The business name changed to Campbell’s Electric Pottery, no longer Victorian & Tasmanian Pottery & Pipe Works. However, wholly clinging to new technology appeared not to be a must at Campbell’s – even until 1956, the pipe and potter deliveries were made using a cart and horse. 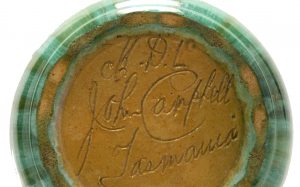 The largest segment of the business run by the Campbell’s was pipe and brick manufacture; however, Campbell was particularly interested in the hand-thrown decorative items. Campbell hired workers who are skillful in potteries.

Indeed, John Campbell was so fascinated by hand-thrown decorative wares that he was found still spending late nights at his pottery in his old age. He continued to experiment with glazes and shapes late into the nights in his workshop.

Denny Beckett and other master craftsmen were associated with Campbell’s. Also, some proofs showed that John Campbell frequently got specimens of high quality wares crafted at Bendigo Pottery and subsequently made moulds from those specimens. He got the specimens from a contact – this was in the mid 1880s.

Campbell and other great Australian potters such as McHugh used the “Drip Glaze” method in their pottery work. This style belongs to the Arts & Craft movement, Britain. While this pottery style had almost fizzled out in Britain by the end of 1920s, it continued to thrive in Australia.

A great man is known by other great people he inspired in his lifetime – this was the case of John Campbell. One of the notable potteries called Premier Pottery in Melbourne Victoria was inspired by the Campbell’s. The pottery which was later renamed Remued was founded in 1929 by David Dee and Reg Hawkins.

Along with his brothers (five of them), Dee was trained in an apprenticeship at John Campbell Pottery. It was at the Campbell’s workshop that Dee acquired great pottery skills and mastered how to use potter’s wheel.

By 1880 and throughout the 1880s, Launceston was already the hub of ceramic production, with the potteries of John Campbell dominating the Tasmanian market. Also, another great craftsman by the name James McHugh thrived with his industrial and domestic potteries during this same period.

While there was stiff competition among Australian potteries, the Campbell’s and McHugh’s cooperated so well in sharing available equipment and even skilled/experienced workers, resulting in rewarding mutual benefits.

According to the story related by McHugh’s great-great grand daughter, Judith Beattie; after McHugh died in his pottery , it was John Campbell who came over to help sustain the business until McHugh’s family was able to come up with some other decisions.

By the time he was only 23, John Campbell already established brickworks and pottery business in Launceston. He was a key figure in the establishment of the 1891 International Exhibition in Launceston. Also, Campbell fought and stood up for pottery industry standards – a typical example is the common-sized brick.

His products varied greatly, from the mundane items such as toilet bowls and drainage pipes, to the breathtaking works of art. One key personality described Campbell’s works as “commercial production with a soul”. Campbell’s pottery wares were described as “a range of high quality, creative world class pottery wares.” These works spanned more than a century period.

Campbell’s Pottery Wares are Worth Thousands of Dollars

Campbell’s hallmark pieces are estimated between $8000 and $10,000. Typical examples of such pieces include an umbrella stand and a huge ceramic water fountain. Even the simpler mass produced items like the garden frogs are worth about $500 at the moment. These were produced in the 50s. In fact, Campbell’s Toby jug was seen with Joseph Lyons – Prime Minister.

In 1929, John Campbell joined his ancestors and his eldest son Colin took over the business. The 1930s art wares were produced under Colin’s supervision. Later, other family members joined in running the business.

However, in 1959, the pottery closed, due to decline in pottery sales resulting from stiff overseas competition.

BOSLEY POTTERY: A Glaze of Glory